Here is my very worried and out of focus reaction. 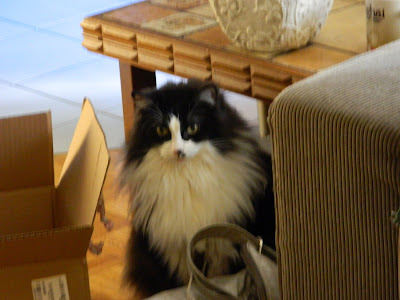 Of course Deli was the first to approach him.  She gave him the butt-sniff test to see if he was a security threat...he wasn't.

Even though I'm still 3 times his size, he was a lot bigger than I imagined. 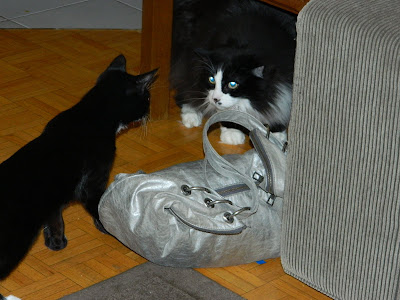 And he was very bold too.   Bella watched on in shock as he tried to give me a smooch!  He's still a baby so I let him get away with it. 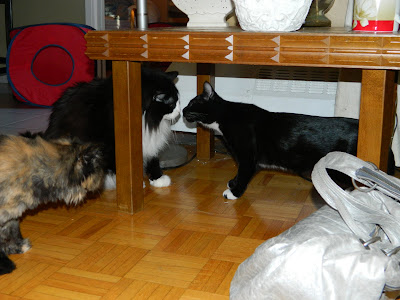 Bella has her own set of security standards, so she also tried to do the butt-sniff test while Sweet Pea looked on in case she had to step in to defend her Gabriel. 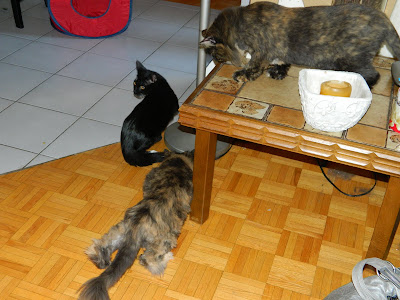 It was a pretty successful first meeting, but the humans decided to cut it short because the little one was slightly overwhelmed.  He stayed close to his Daddy after he did all his exploring. 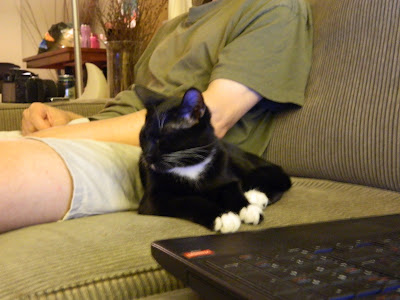 All of us were very well-behaved and the humans thought it was cute how Sweet Pea was always watching over Gabriel.

We're glad your meeting with Gabriel went well! He was probably overwhelmed by seeing two more beautiful Torties and of course such a handsome Mancat like you Samson! That's a lot of gorgeousness to take in for one little kitten. We hope he gets to come back to visit soon!

Ahhh, that just makes us purr thinking of Sweet Pea watching our for her little kitten. As for the meet up...you never know about kittens so you were wise to be sure he wasn't a security threat!!! Ha! Maybe a threat to your treat supply!

I'm glad it went well. All that butt sniffing can get tiring

He seems like a pretty nice little guy. Hope he passed the butt sniff test!

He seems like a pretty nice little guy. Hope he passed the butt sniff test!

Aww, he's growin up so fast. Seems like they all get along really well fur the first time. Concats.

Wow, Samson, when I saw you shooting lasers at Gabriel, I was worried! But I'm glad you were nice to him after all. So far so good!

Awww, Sweet Pea, you're just so sweet with your new baby brother... hey maybe I could send you MY baby brother too!!

Gabriel is a nice boy! We are glad there was no altercations! Here I am sure I would have hissed real loud if some cat sniffed at me!!

That looks like a great first meeting for you all. It won't be long until you are the bestest of furriends :)xx

Well done everyone! Gabriel look so content to be back with Daddy.

We weren't sure what was going to happen, Samson, by your expression! But we're glad it went well--if there was no fur flying or blood shed, it was a success. LOL.

Way to go Gabriel! You passed the tests, and no whapping! That's great. It's so happy when kitties meet and can bet along :-)

AWwwwww!! Yay!! Glad you all got to meet sweet little Gabriel, handsome Samson, adorable Delilah and bella Bella!!! Awwww and great to see amazing Sweet Pea being all protective of him too!

A fab meeting all round! take care
x

It must have been quite daunting for little Gabriel suddenly meeting all of you but we think he did great and so did all of you. It was great how Sweet Pea looked after him.
Luv Hannah and Lucy xx xx

Oh Gabriel, now you are officially a Monkey. Glad Sweet Pea looked after you while everyone was meeting you. Mom is trying to figure out how to introduce little Mahoney to the rest of the gang. Poor Mahoney doesn't understand why they spit at her and growl at her. But so glad to see Gabriel a part of the gang now. Good idea not to do it too long. Take care.

WHEW! That HAD to be tense for Gaberiel. Well, efurrybuddy really. Efurryone was so well behaved!

How wonderful that everyone seems to be fitting in together nicely ~ sounds like there is going to be a lot of extra love here!
xo Catherine

Overwhelming to say the least, Gabriel! Not only do you have to win Sweet Pea over, which you already have a great start, now you have 3 more to win over!! What a tough job for a mancat-in-training! But we know you are up for the challenge and can do it!!

Wow, I did not know you could determine security threats with a butt sniff! And all this time I just thought it was ... never mind. MOL. Glad the meeting went well. I'm sure you and Gabriel will be fast buddies in no time.

Glad to hear the first meet up with little Gabriel went so well! Samson aren't you glad to have another tuxie around!!

purrs from all of us!

That looks like a fun meeting. WE understand it was overwhelming for the little guy!

13 tails up for a successful meet-n-greet!

Mommy is worried that airports might start the type of security measures employed at your house. You know, butt-sniffing.

What a great first meeting! I don't think it could have gone any better. Usually there's some hissing or growling to be done, but I guess Gabriel doesn't come off as dominant, so it's easy to accept him.

I had to laugh at the picture with Bella sniffing Gabriel's butt!

And yes, it's so sweet that Sweet Pea is protection of the little guy.

Gabriel
You are one very brave mini mancat. You are also have great manners. We are so glad that your first meeting with the all the Monkeys went so well. WE know you all be very good friends and we were so impressed with how protective Sweet Pea is.
purrs
>^,,^<
♥Abby♥Boo♥Ping♥Jinx♥Grace♥

Wow! All of you are so civilized! No spitting or biting?! Amazing! Mica Moo's been here over a year and the house is still a war zone. You are some pawsome kitties!

you better watch out! Look at that expression on Gabriel's face, he looks like he is gonna take over the place!

What a great first meeting.

Wow, that sounds like a pretty fantastic first meeting for everybody! :)

We're glad first meet of 'getting to know you' went well.

Alasandra, The Cats and Dogs said...

We are so pleased Gabriel is fitting in so well.

I'm so glad that Sweet Pea and Gabriel are getting along so well and that the meeting with the Monkeys was smooth.