Mommy has always had a problem managing her finances. Frankly, Samson and I don't think she spends enough on toys for us, but that's only a small part of the problem. She has decided to follow The Ball Guy's advice and work on a budget for her spending. We're all a little surprised that she's actually listening to The Ball Guy! 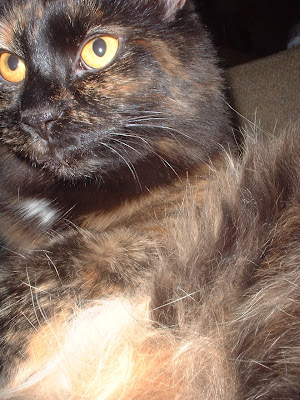 As part of the budget, Samson and I are going to be receiving a weekly allowance. We will be allowed to spend it on whatever or whomever we want! The allowance is for everything above and beyond our food, shelter and vet bills (and we're pretty sure Mom will still buy us some toys). So, in other words, it's for toys! She's hoping that we will be charitable and not too greedy (she was looking pointedly at me when she said that...I don't know why).

Mommy suggested the weekly sum to be $3.00 each. That's ridiculous; that doesn't even cover the cost of one bag of 4 soccer balls ($3.69 CDN + tax). I think $10.00 a week is a little more in the ball park. I've sent Samson to her to do the buttering up since compromise is not one of my strong suits. I told him to use whatever means he has at his disposal, especially the yawn-squeak. I have no idea why, but she turns to mush every time he makes that absurd noise.

We'll let you know what the final number is as soon as we can all agree on an amount. Let's just hope that Samson's charms will be profitable for us!

P.S. I've gotten the (ever-willing) Ball Guy, to help transcribe this blog, as I don't want Mommy to get wind of my tactics while we're in discussions.
Posted by The Monkeys at 12:01 AM

It's great that your mommy wants to get control of her finances but there's got to be something else she can cut besides your allowance! That's just crazy! Hopefully Samson can get her to change her mind and get a more reasonable amount since a cat's got to play!

We hope the budget works for your Mom. Our mom needs to start learning before teh first of the year how to do this. Let us know if your tactics work.

Good luck with the negotiations!

Toys are just too expensive! Mom hasn't brought any toys recently... but she has been to petco (with a group kids from school). She felt guilty and bad cause she didn't!

I wishes you much luck wif da negotiation of your allowance, toys are pawsome!

Wow! We do not get any allowance. However, we get pretty much everything we want, so we do not mind. Good luck in your negotiations!

Hasn't your mom heard of inflation?? Toys are expensive these days, 'specially the fun ones!

We don't like to admit this, but some of our favorite toys are free! We really like big rubber bands, and sometimes the mailman brings those. And one of Franklin's favorite toys are grocery store receipts squooshed into a ball - he gets one every time we go to the store.

Our most cost-effective toy is our cat cubes. We never get tired of those, and they are a good place to keep all the little toys too. The boogie mats also give us a lot of bang for the buck.

P.S. Mom also says that being on a budget is hard - but we know you can do it!

BUDGET? Tommy froze to hear that word. She says it should be in her vocabulary---it's not--yet. But 3 dollars? Oh NO! Can't even buy a small bag of Iams for that! More discussions...yes! MORE!

We sure hope the negotiations go in your favor guys! Is $3.00 enough for a good bag of nip these days??

We have really gotta have a talk with our mom about a weekly allowance! What a great idea!

I am curiouser and curiouser about this "Ball Guy", and why he is called the ball guy. Maybe a reasonable amount is somewhere inbetween $3 and $10 purr week. If you average it out, that makes $6.50. But then there are those darn Canadian taxes to contend with, so I think at least $7 would be fair. You should get a couple of new toys every month that way. Good luck!

Good luck, Delilah, that pitiful amount she wants to give you is just sad. Let us know how it goes!

Good luck on "buttering" mom up! We are still taking requests (the first 3 emails we receive) for the Paw It Forward. It is our turn to recipricate. (So, tell mom you'd be getting GIFTS!) And, who doesn't love that?!?

WE can't remember who the ball guy is but he sounds like a good ally for you to have. Good luck in getting a higher amount.

We don't have many toys like some of you lucky cats do...We just get heeps of catnip...She thinks it makes us forget about the lack of toys.

The humans always with their money....... LOL
Maybe she buys your toys :)

I hope the budget works for your mom - you will have to keep us posted. And is it $3 each or $3 total for both of you. Because you could pool your money together if it is $3 each and get some good stuff I bet!

Your mommy is very smart to make a budget. Nanny should make a budget too. The cookie we bought cost a little more than $3.00 including shipping. I'm sure you guys will manage your allowance very well.
Nanny will be in Montreal next week, her auntie just died this morning.

I know, Nanny just got the news while she was writing you a note.
Auntie was 85 and she is the sister of Nanny's father. The part of life that Nanny doesn't like.

Wish you a good night!

I Need an Allowance!