Mommy's friend, Jenn, is considering getting some kittens. She went to see them tonight so we're keeping our paws crossed that these two gorgeous little girls will be our future friends! 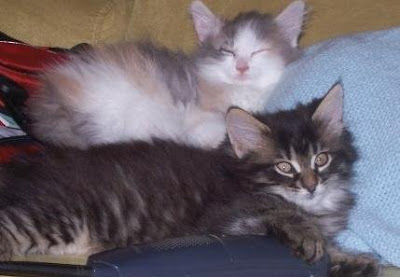 Their story is; one of Mommy's co-worker's sister's son (that was hard to type but it actually makes sense!) found a very pregnant feral mama cat. It was so cold so somehow he got her into the house where she gave birth. The mama cat was so wild that they had to keep her in the basement and throw food down the stairs. She was so freaked out that when they opened the window, she ran outside. Mommy's co-worker's sister (we'll just call her Sister) fed the babies and when the mama cat came back to see her kittens, they captured her and brought her in to be spayed and then released her. Sister built some shelters in her backyard for the feral cats in the area and the local shelter is spaying and neutering any that they can bring in. There is a huge problem with over-population of feral cats in this area (South Shore of Montreal) so we are very happy to hear that Sister is helping out this way! 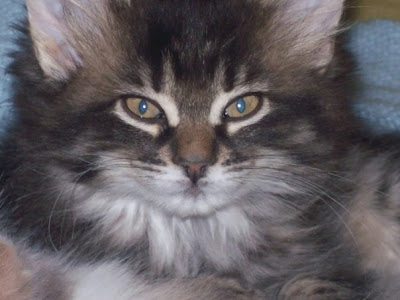 There were four kittens and Sister is very allergic to cats so, despite her love for them, she can't keep them. She adopted two out to her other sister (this is getting confusing). The two in the photo are the ones that are left and Jenn (who I always flirt with when she visits), is considering adopting them! 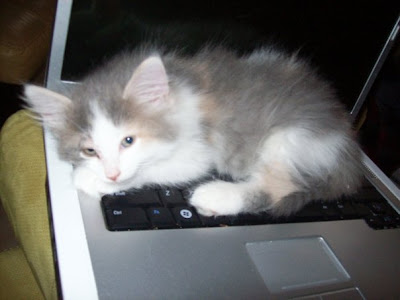 Keep your paws crossed that we will have new friends soon!

We are purring that these babies will get their furever home and be new friends!

Oh what sweet babies! Hopefully Jenn gives them their forever home! And how wonderful that your mommy's co-worker's sister (hope I got that right) is getting the feral kitties spayed and neutered!

Awwwwwwww.....
what a sweeties,
Those babies ar always so CUTE :)

They are so cute! I hope you two get to hang out with them.

We hope Jenn will adopt those kitties! They're so cute, how could she not??

Oh wow! Aren't they just little cuties! We have to say a big YAY for sister for the TNR she is doing!! Mom wishes our shelter helped them out with spay/neuter, but it doesn't.

We sure hope these two cutie pies end up being your future furiends!!!
HAPPY FRIDAY!

Oh Samson, those two little kittens are so adorable! How could anyone resist? I vote with you, that your furiend should adopt them. What a great job Sister did in keeping them alive and thriving!

We is crossin' our pawz! Babiez iz just so much funz! Will youz be able to share some photoz of dem in dere new home?

Thanks to Sister for doing so much to help feral kitties! It always makes me feel better when I hear about people like her. The kittens are beautiful - I'm hoping that they have found a forever home.

They sure are cuties! I hope they get adopted and become your new friends!

Oh my goodness, what darlings! We hope they've found their forever home.

Oh I have all my paws crossed and mum has her fingers and toes crossed. Those babies are adorable and deserve to be loved in a forever home.

Oh! I hope the kits get homes!
purrssss,
Evy

Don't worry, we were able to follow your story! Oh, that was so nice of that family! Can you give a message to Jenn from us? Here it is: Please, Jenn! Please adopt those sweet babies! They'll give you so much joy and happiness!
~Tristan and Crikey

Those are lovely kitties. We hope they soon become your friends.

Here's to purring that those cuties find a nice new home.

We are keeping our paws crossed for you! Hope you get new friends! Those kittens are so very adorable!