I'm the Mancat in this house and I weigh more than Delilah so I really don't understand why she calls all the shots! I'm very respectful of the females in my house but just because they're female, does that mean they can boss me around and push me out of my spot?

Deli and I were having a 'makeout' session in the old aquarium. Everything was going fine until she decided she didn't want to let me clean her and she wanted to snooze. As you can see in the photos, I already didn't have enough room to begin with! 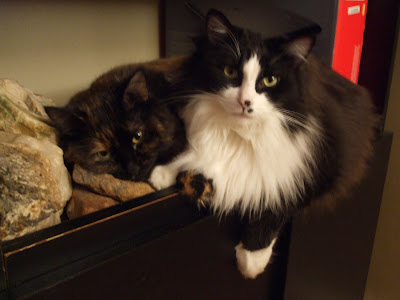 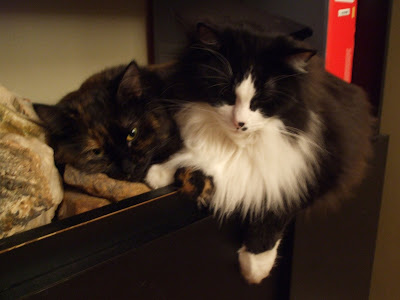 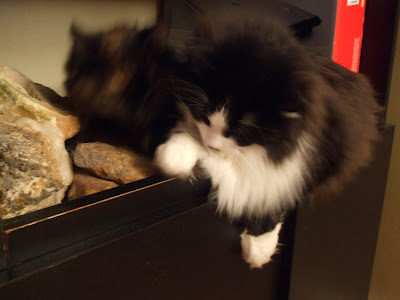 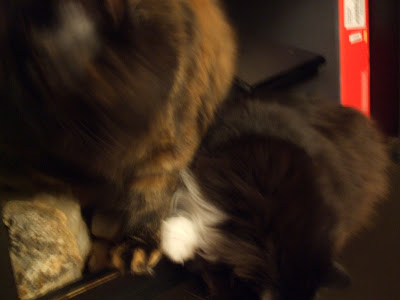 I often wonder if any of my other Mancat buddies have to put up with this kind of behavior from their Ladycats or if I just have to learn to be more assertive!

To make matters worse, the other female asked me to use my Mancat Monday post to update everyone about Jenn's new little kitten. These females are so bossy but here goes - Apparently her name is probably going to be Pasha and Mommy is going to visit her sometime this week with the camera. I also heard that Mommy got together a little 'kitty care' package for Jenn and Pasha (because Jenn is a new cat mom and doesn't have all the essentials) that included some new toy mice! I LOVE toy mice!

Mommy says I'm complaining and I think Deli wants to work on her Tortie Tuesday post so I guess I have to sign off....sigh.

I'm going to try to go boss them around later - wish me luck!

Cosmo always seems to get her way at my house. It must be a girl thing!

We don't have a Mancat in our house but Isabella gets her way with her daddy all the time.

Samson I think youe ar so gong to have to put your foot down. You are the man of the house, so tell them so.

I love the name pasha, how cute is that. loking forward to seeing pictures.

Yes you are a real mancat
we can see that ;)
Lovely pictures from both of you,
so sweet !!

Samson, I believe that is what they call "tortitude" and trust us, we have to put up with a lot of that from Boss Lady Maggie May!

We are so happy that Pasha has found a great forever home! So nice of your mom to put together a new kitten package for Jenn!

Tasha pushes the mancats here around all the time so you're not the only one. It definitely has something to do with tortitude! At least Delilah lets you sit next to her - Tasha refuses to share anything.

BTW, we still can't figure out why either of you likes to sleep on those rocks!

P.S. The comment your mom left on our blog was SO funny! Our mom started laughing out loud. And we're glad to hear about Pasha.

Good luck, Dude. I'm lucky, cuz I gots all brothers, and Dad. Mommy's the only lady in our house, and, well...I think she's ok.
BYE!
Scooter

Hi Samson,
My sister, Shilgiah, is all bossy too. I can groom her for awhile then she bites me if I lick one more time that she wants...but she never says..."That's enough now"...and other times for no reason whatsoever she chases me through the house. My little sister Hope doesn't do those things...yet.
Your friend Tommy

We haven't got any ladycats here, but my brofur Eric hogs all the space and if he wants more, he sits on me. I haf to move or get squished flat.
Flynn

You are such a gentleman! ANgel is very laid back but get her riled and she is the boss!

I would just LOVE to lick and groom Tristan, but she would sooner slap the tar out of me than to let me touch her! Good luck, furriend! ~Crikey

Pee Ess: Our Mama scans the sky and trees when I go out, and I'm never alone. There are too many hawks, foxes, and owls around here!

I fink you are furry nice to try to please the lady cat.

Samson...we've got Zoey here and she's as pushy as Delilah! I try to keep her in her place but then she just cries!

If we had a mancat in our house I thinks jane would beat him up a lot.....

I'd say you could come over here and boss me, but we both know that's not true.