I'm very concerned because I've found my evil twin, and he's living in the same city as me!

A co-worker of Mommy's was walking by our friend Jenn's desk while she was checking out my blog, and he noticed that I look like his cat, Jesse! Of course, Mommy wanted to see pictures of 'Jesse' (if that is, in fact, his real name) to see how much he looks like me, and she agrees that he is my doppelganger. 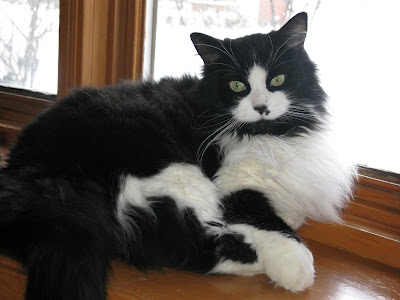 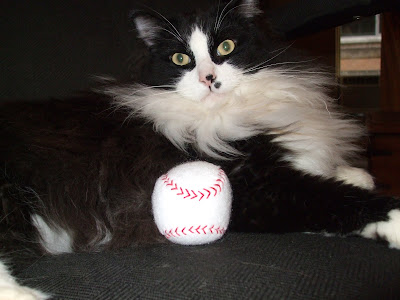 I have to admit that he's a handsome fellow. He's even got one of my Sharpie dots in exactly the same spot. But friends, please don't be fooled by his gentle appearance - that's exactly what he wants!

Evil Samson's Dad claims that he's sweet, affectionate, great with his kids and an all around good cat, but if you're a Star Trek fan, you may remember an episode where Spock has an evil twin. The only difference in appearance was the telltale goatee. Evil Samson has a beard, which proves that he is from an alternate universe, and because I'm very good, he must be evil.

I'm worried that Evil Samson will use his charm and good looks to do harm. I hear he's already terrorizing and brutally murdering mice and chipmunks in his own neighborhood. Sweet and affectionate? Hardly! Although I do not have exposure to live mousies, I assure you that if I did, I would murder them with love and respect, not like the callous-hearted Evil Samson.

Who knows what Evil Samson may be planning? I want the world to know the subtle differences in our faces, so that if he tries to fool you into thinking he's me, you'll be aware of his trickery. 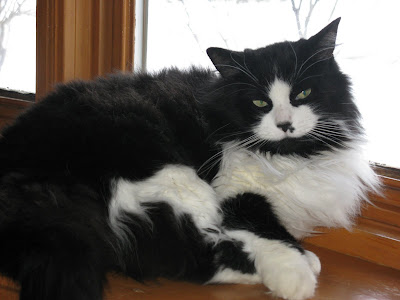 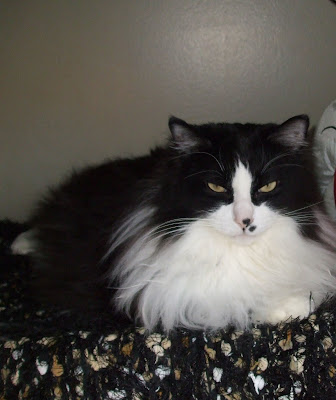 My best chance for defense from this horrible creature is the household 'muscle' Delilah, but when I tried to warn her about him, she dismissed me and said Evil Samson was 'kinda cute in a familiar way'. Obviously I cannot rely on her to help...

If you see Evil Samson, do not approach him! He is armed with incredible handsomeness and should be considered extremely dangerous.

My eyes are on him, and as soon as he makes the wrong move, I'll expose him for the vicious sociopath that he must truly be.

Good Samson
xoxo
Posted by The Monkeys at 12:01 AM

I'm sure his Sharpie dot will wear off, as he's obviously drawn that on to try and look like you.

There can only be one Samson!

There can only be one Samson, but I must admit, he sure looks like he could be your twin!

Oh my gosh! OH MY GOSH!! We have SEEN that Star Trek episode and YES! he is DEFINATELY evil....he has the goatee! Be very, very careful Samson, and guard Delilah day and night!

In a way, this all was very reassuring. When we saw the headline Evil Samsom we thought... We don't know what we thought, but that it couldn't be true. But then it wasn't about you, so it could be true. We'll be extra careful if ever we should meet the fellow. We think he looks a lot like you, but doesn't have that good Samson-vibe.

You are the one and only Samson! But holy mackerel, you guys really do look a like!

We don't think we could be fooled by an imposter, but he sure does look a lot like you!!

Don't worry Samson, he only looks similar if you look quickly. Your obviously you.
cindy

Wow, he does look a lot like you. We will keep a lookout for him.

It's amazing the similarities between you two, but I can tell the difference -- not to worry! You are still much more handsome Samson. Jessie pales in comparison.

Wow! The resemblence is spooky. The imposter will give him self away soon enough. We will be on the look out too.

Evil twin! Oh no watch out and hope he doesnt take over your lifes!

He put a little too much sharpie on his nose to fool us into thinking he is you, Samson. And don't worry, if push comes to shove, we're sure Deli will go to bat for you. xxxxxxxxxxx

Holy smokes! He IS your Doppleganger! A furry handsome dud we might add. Scooter(RIP) has a doppleganer too. Laila from Laila and Minchie! They say, everyone has a twin out there. Sorry yours is an evil one! It's them good looks...

So you think you'd murder mousies with love in your heart? tee hee...

We will definitely make sure we study both your photos carefully so we won't be fooled.

We are quite familiar with the Star Trek episode with the evil Spock, so we knew right away what Evil Samson's beard meant. We will be on the look out though, so we can warn others! Be careful he doesn't try to mess up your good reputation!

I am studying the evil imposter's face closely, so if some cat-crime is committed, I will be able to tell it was not you!

TWO Samsons! One for each of us! Evil? Oh we hope not! But of course there can only be one handsome original Samson so we still only love you Samson!

Well Samson, he does look a bit like you but we will not be fooled ;)
You are the true,good,handsome Mancat
that we know and trust ;) Mom also saw the 'Evil Spock', and he was bad!!
You are not bad. You are a badass, rockin Mancat!!!!!!!!! heehee
Purrs Mickey, Georgia & Tillie

Your nose is pretty pink and his is all black! We will be on the watch for Evil Samson.

He looks shifty, thank Cod you are here to save us Perfect, Handsome, Good Samson.

Samson, thanks for the warning!