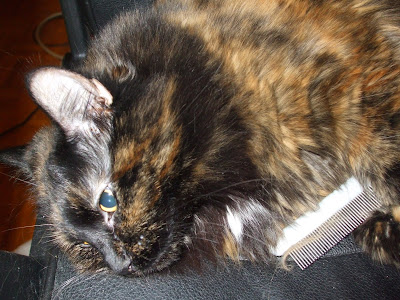 My distaste for being groomed is not a secret. Mommy has really been putting in a good effort, but I'm even more stubborn than her.

After our last attempted grooming session, I turned the tables on Mommy and grabbed the comb. 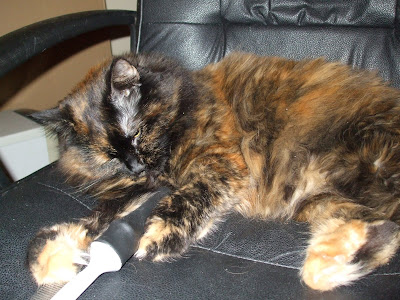 When it occurred to me that she really doesn't have much fur, I did the only thing I could think of to get rid of this daily torture - I attacked IT and tortured IT 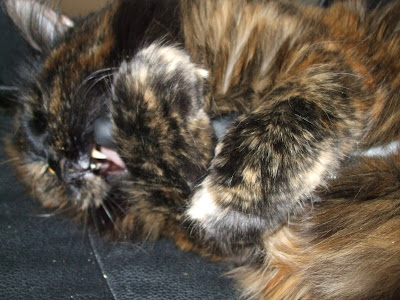 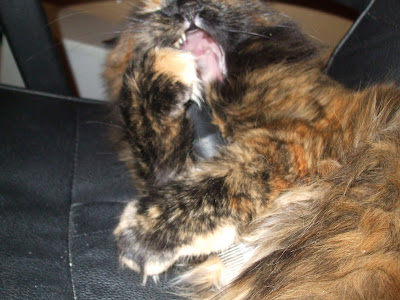 Unfortunately, despite my battering, it looks like it's still functional. 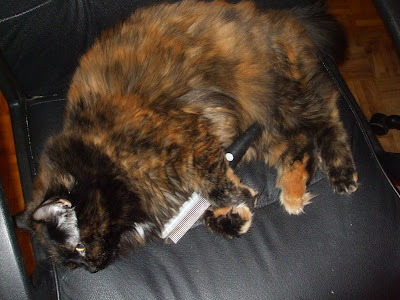 If only there was a way to destroy this awful contraption! It's only a matter of time before Mommy tries again.

So many kitties don't like the grooming comb, we don't blame you
Delilah. Sometimes the furs have
knots and it pulls our skin! Ouch!
We fight the comb sometimes too! :)

Mom hasn't found a comb for me yet, but I get brushed every day. Actually, I like being brushed. I purr the whole time.

I am not a big fan of being groomed either. The PM found us a Zoom Groom and I hate that too. Maybe I'll have to attack it next time.

We don't get brushed a whole lot but we don't mind it much. I think Momma will step up the action with the spring shedding though.....

Oh Delilah, I know what you mean. I hate the brush!!! I attack it anytime mommy tries to groom me.

You gotta stick it in the litter box....then do your business and leave it in there...your mommy will never see it coming and not want to use it

I'm sure all the great cat minds of the CB can come up with a solution to get rid of it!

I hve to agree with you wholeheartedly. I hate being groomed and that is the only time I am not my sweet self. Thts why I end up getting a lion cut every year.. Hugs GJ x

Go naked, then you won't have to deal with combs and brushes.

Beautiful Delilah, you need to hide it instead of trying to destroy it......we have found if we shove things under the frig, it's a good while before mamabug finds them....:)
xxxxxxxxxxxxxx

Well, at least you gave that comb what for even if you didn't damage it much....I actually like getting combed...I'll come running when the lady with the yellow hair shows me the comb!

You tried to destroy it. We like to be brushed.

Try putting it in the garbage when mom is not looking, or throw it under the couch.

Some of the kitties in our house, who are not fans of grooming, like to do the same thing with the comb. Luckily the others like to get combed, so it evens out for us!

We don't blame you Delilah, we don't like being brushed either. If you find a way to destroy the comb, let us know!

MOL!!! Sorry you didn't get it deaded! We have to disagree and all 4 of us love to be brushed!

I do that too but I let mommy brush me. Maybe that's the secret... I hate the comb too, and Mom asked the other bean to comb my rear quarters! HELP!!!!
-Nimbus

I prefer a brush myself, Deli! You did good trying to attack it! I love a girl with some muscle! >wink!<

Those things are pretty darn durable, Deli! The only thing I can think of is to throw it in the garbage, under something else so that she doesn't see! You could also bury it in your litter box, but she'd find it eventually -- it might gross her out, though.

Nice try on torturing that thing. Better luck next time.

We use two brushes...one to keep the bitey end busy, the other to actually do the brushing. It takes time to work it just right...
~Lisa Co9T

Poor Dalilah, did you ever heard about that you have to suffer to be more beautiful? It's true for humans but definitely not true for you...you're already beautiful.

Good for you. You took matters into your own paws.

Well, part of being so fabulously floofy is the need for a little grooming sometimes, you know...

Dreadful! Good for you Deli!