Mommy was very excited to receive our Angel VSQuillions the other day, and she will be putting them in our sidebar soon.

The first one is Muddy, or The Mudman. Mommy has written about him before, so if you want to read about him, you can click here. Muddy died shortly before we came to live here in August of 2006 and, of course, Mommy misses him every day. 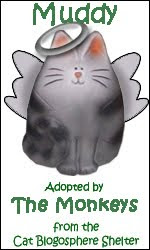 Next was Desdemona. She was with Mommy for 15 years and she was a crabby Torbie. Actually, she wasn't crabby with Mommy, but she was the only one Desi was nice to. Mommy said Desi used to be really nice until her love, MoMo (see below), died and Mommy adopted Muddy. She never was the same after she lost sweet MoMo. Desdemona died of kidney problems in 2004 on Mommy's birthday. Mommy had found her 15 years earlier on her birthday as a tiny kitten under a parked car, so she thinks it was appropriate that she left on that day too. Mommy misses her very much. 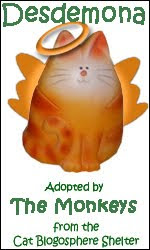 Last, but definitely not least, is MoMo. He was a thin, short-haired tuxie. He was a very special gift to Mommy from a friend of the family. The little girl, Kimberly, gave Mommy her own cat MoMo when, after a visit, she noticed that MoMo and Mommy were crazy about each other. Kimberly died a few weeks later in a car accident with her two brothers. She was only 13 years old. Mommy thinks the little girl instinctually knew something was going to happen and that's why she was so insistent that MoMo go live with Mommy.

MoMo, like Kimberly, died far too young at 9 years old. He was having surgery to prevent his crystals when the vet found that he had cancer all throughout his body. The vet suspected that it may have been caused by the food he was eating (Science Diet), because at the time it contained an ingredient called Ethoxyquin, which is a rubber stabilizer and a known carcinogen. Mommy sometimes still cries about MoMo and he died in 1997. She said he will always be in her heart and she misses him like crazy. She hopes that he is with Kimberly again. 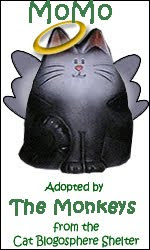 We are so happy to have adopted these three so we can keep an eye on them. They paved the way for us to be spoiled and loved, and we're very happy they're here...even Desi, the crabby torbie!

You can adopt your own VSquillions here

Samson and Delilah
xoxo
Posted by The Monkeys at 12:01 AM

Thank you for introducing your new VSquillions and telling their stories. We love our VSs because they honor three of the charter members of JFF.

They are three very special squillions and the stories are lovely.. Thank you for sharing them with us.. Hugs GJ xx

We enjoyed reading the stories about your special Angel VSquillions! The tributes were lovely and made our mommy leaky. We're all sending lots of hugs to you!

Yoor Angel VSquillions are just beautiful, and the cats they represent awesome. It was lovely to read their stories and to know that however long they were wiv yoo, they were loved and had a happy life. No cat can ask for more than that.

Thank you for sharing the stories of the One's Who Came Before and how you named your vSquillions in their memory.

That was a wonderful tribute to three beloved family members who have passed on. Lovely.

Awwww, those are lovely Angel VSquillions and we love reading their stories. The story about Kimberly and her brothers is very sad, though. The Mommy is a bit leaky about all the stories.

Purrs and hugs to you all,
The Kitty Krew

PS - we're gonna see about having a house-trashing party while The Mommy is gone, hope you can come if we do! :D

Such a lovely tribute to three great cats who touched your heart, and who will never be forgotten -- especially now that you have your Angle VSquillions as a permanent reminder (not that you would forget them anway, but this keeps them in your consciousness every day).

Thank you for sharing the stories of your special kitties. Now they are in our hearts too.
~Lisa Co9T

Oh, thank you for sharing the stories of your angel cats with us. xoxo

Such very heartwrenching stories and we are so happy that you now have these lovely squillions to honor these past loves!

Thanks for sharing their stories.

ConCats on getting your Angel VSquillions and thanx for sharing their stories with us!

Oh, how sad. Now Mom's eyes are all leaky. Your angel squllions are very special and deserve a place of honor in your sidebar.

Thank your Mom for introducing us to her three special squillions. Those were all furry special stories and we all got chills when we read the one about Momo....

It is nice that you can remember those special kitties that came before. Thank you for telling their stories.

My human has leaky eyes after reading about your angel kitties...

What special stories about very special kitties. Mom is more than a bit leaky about Kimberly and MoMo.

That is a nice intro to your friends that were there before you. How hard it must have been to lose one's kitty on your birthday! And to have found her on her birthday! Interesting stories!

What a special tribute to your special cats that have gone before you...the Angel VSquillions will be a gentle reminder of them...

You made Mom all weepy now!! Sob!

Thank you for sharing the stories of those who came before you. We're sad about what happened to sweet Kimberly and her family:( We don't understand why such things happen...