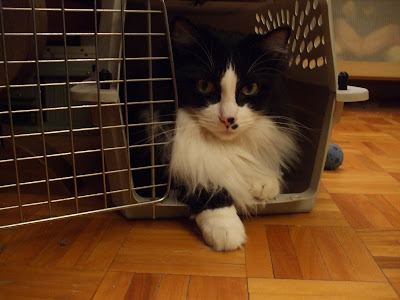 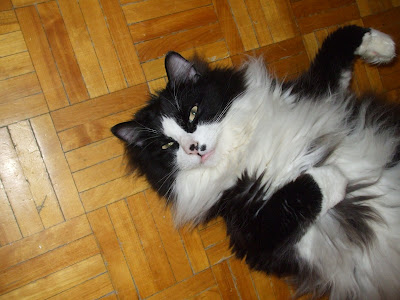 We're back! Actually, Mommy and I are back. Deli never left.

I figured Mommy wasn't stressed enough so on Wednesday, when she had to go to a doctor's appointment to confirm she was okay for surgery, I strained to pee and just squirted out a small amount when I was in the litter box. Of course she brought me to the Vet right away and he said I had an irritated bladder lining and he was going to try to get a urine sample. Unfortunately, the irritated bladder meant that whenever I had to pee, it was so uncomfortable that I had to get it out as quickly as possible so they put me in a cage without a litter box so my bladder would fill up! I wouldn't put up with that and just peed in the cage! They tried all day. They said my belly was too 'fat' to palpate and my bladder wasn't filling up so they had to go in with a needle. Anyway, Mommy was a wreck but she trusts this vet to take care of me so she went to the hospital for her surgery and had the Ball Guy pick me up on Thursday. They shaved my belly so you can see my pink tummy! 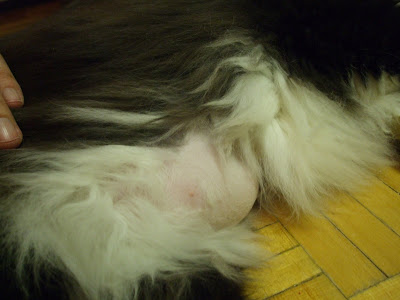 I'm fine now (after Prednisone) and Auntie Stephie bought us a cool water fountain so I'd drink more. I'm also supposed to have more wet food which is not so bad (although I've gone through a few I refuse to eat) but I should be fine.

Mommy's home! It is good news for Deli and I (although Deli hardly noticed she was gone - she was all over the Ball Guy). Mommy's very sore and she doesn't move as much as she used to. She was sleeping and I jumped up on her belly and she screamed! I don't know why she's so sensitive. She keeps saying the operation was successful but I don't see how. She just lies around and asks The Ball Guy for stuff (like he doesn't have enough to do?!). When Deli got back from getting fixed, she was running around within an hour.

We are so heartbroken to hear about our good buddy Cal. He was a really special dude. As short as his time was, we think his family was lucky he was in their lives. Cal was the coolest in the land and we will miss him and hope his family is okay. 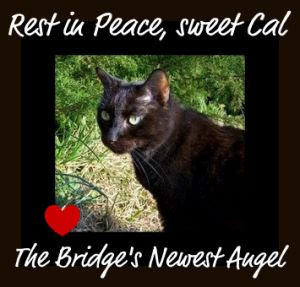 I'm happy to be back and Mommy's got a few weeks off to catch up on stuff so hopefully she can get her lazy butt off the sofa and help us blog!

Samson
xoxo
Posted by The Monkeys at 6:06 AM

Thanks so much for your tribute and kind words about our boy. We miss him dearly and cannot believe he is gone. We know he is in a great place and no longer needs fluids and pills.

Oh my, that must have added up to your mommy's stress. Poor mommy! We are so glad you are both back to your lovely home and are having time to recuperate together. We missed to see your lovely faces! Samson, have a good go at that drinking fountain, it does you good. And all the best for your mom's recovery! we are very sad about Cal too, all the time we thought he would pull through.
Purrs, Siena & Chilli

Glad to hear that both you and mommy are home and doing ok.

Nosey & I didn't know Cal, but we are so sorry to hear he is gone. Sending big kitty hugs out to his family.

Samson, we're glad your mom's back from the surgery and getting better...and we're glad your pee problem is resolving. Hey, there's two things we really like that helps to hydrate us. One is Tuna Juice and the other is HAM Baby Food. My sister has been having it with her antibiotic she has to take and we've tasted it too.

Samson, I'm happy that you're OK, although I feel for your mom! That's a lot of stress at one time. Glad to hear that her surgery was successful and hoping she has a very speedy recovery (without cats jumping on her tummy!)

The water fountain sounds like a really good idea, by the way - I need to look into getting one of those.

Samson, We are Glad you and Mommy are doing better. It seems to lake longer for beans to get back on their feet after surgery! Give her lots of cuddles, but stay off her yummy

Me miss Cal too..

Poor you! I hate piddle problems. We mancats need to make sure we drink plenty of water as our manbits can get clogged with crystals (that happened to me - ouch).

Samson, I sure hope you and your mom feel all better soon. I'll bet your mom sure is happy to be home.

I'm glad you're feeling better Samson, although that shaved belly is awfully cute! I wasn't borned yet when my momma got fixed but she said it made her feel better. I'm sure your momma will feel better soon too.

Samson: so glad to hear Mommy's surgery was a success even tho she's a little sensitive. You and Delilah will take good care of her. And we're all glad to hear you're doing better too--with your pink belly! PURRS!

I'm glad your mommy is home and doing well! And I'm glad to hear that you are doing better too! Be sure to drink lots of water from your new fountain so you don't have to go back to the vet any time soon!