Today on Friends Friday, we wanted to introduce you to a friend of ours in Ohio - Max The Manx!

Max doesn't have a blog but we think it's because he must be too busy looking handsome! 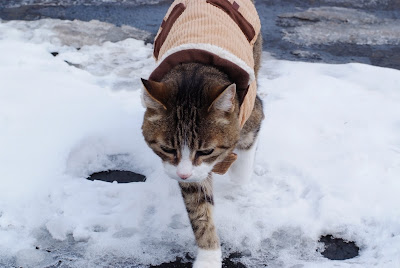 Max is a 16-year old Manx and though he's recently retired from hunting due to a little bit of arthritis, he still enjoys patrolling his neighborhood in his dapper hunting jacket. His humans put a little bit of nip in the pockets in case he wants a little 'pick-me-up' during his patrol. He isn't afraid to admit that he's a nipaholic, but really, who among us isn't? 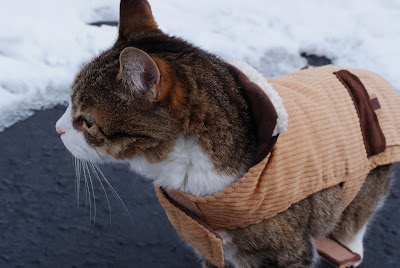 Max is still single, but he wants the ladycats in his area to know that he might finally be ready to settle down. He enjoys long, moonlit walks, turkey and dead mousie arranging. 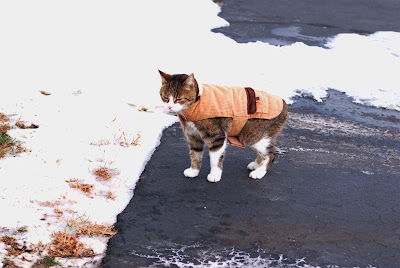 Max is very handsome in his hunting jacket! We've never done any dead animal arranging but we do carry our toy mousies upstairs every night so Mommy can step on them when she wakes up!

Max does quite dapper in that hunting jacket. I know how he feels about his bones aching.

Lookin good dere Max. Carefuls wit dem Lady Kitties. De has all kinds of chores for a noble hunter to do ..... da kinds what noble hunters don wants to do. Still, dey is so nice to has around .....

SOWRY we had to delete our above one cuz the mom cant spell tonight ; (

as we were saying , we have 3 lady cats in our crew. well, one is daddys girl, so she is taken, and, well, oh, yeh Lucky is kindof Stripes g-friend, BUT Pengy, Pengy is a beaut and just loves men in uniform ; )

i just love the nip-in-the-pocket getup idea. gotta have your stash on paw.

you are one very handsome dude cat!

Nice to meet you, Max
I never seen cat in hunting jacket before.. Look cool and keep you warm..Pretty Good Idea : )

What a cutie!!! Max looks very handsome and spry in his jacket!! Hello there Max!!!

How cute is Max? And I love his coat. I bet it keeps him so nice and warm. Now all he needs is some little winter boots to keep his toes warm. brrrrr.....

Wow, he's a good looking mancat! And we love that jacket of his!! He's gonna give us some competition with the ladycats, we see.

Wow, Max sure is handsome. What a great coat for his hunting games. We arrange little dead bodies sometimes too. All the women are packing their bags and are on their way on their teleport to Ohio. Hope everyone has a great week end.

Max is furry handsome fer sure! We think his hunting jacket is divine!

That Max is one handsome dude!

Max is so dapper in his hunting jacket - such a country gentleman. We are sorry he has given up his hunting, shooting and fishing activities but has he taken up wooing ladycats yet?

Max is a very handsome mancat!

We are so happy to have met Max, and we are purring that his ladycat will show up. All mancats deserve a special lady. Does Samson realize how lucky he is to have 3 beautiful ladies??????

We love y'all so very much, and hope your weekend will be wonderful.

Max is a super handsome ManCat. The Birman girlz are all swooning!!

The Florida Furkids and Angel Sniffie

Thanks for introducing us to Max, he sounds like a cool guy (great he takes his nip around with him) and a good catch! Best of luck on your search for LUV Max!

Max IS handsome! Its a good thing he don't live near me! Me would be chasing him for sure! Me loves a man in a hunting jacket.
Nellie

I am starting to feel a little dizzy from all the admirations I have going out to him. My GOODNESS! What a MAN cat!

He looks so furbulous !!!

Max is a good looking kitty! :)

Wow, Max sure is handsome, and he looks great for his age! I love his jacket too! Purrs

Max sounds like a great catch :-) What a fantastic coat!!!

Now doesnt Max look the dapper gentleman in his jacket.. Quite the catch.. Hugs GJ xx

Hi Max
I'm a manx too!
I am always admiring any manx I meet.
YOU are one handsome mancat!
Love your little jacket.

Hi Max, nice to meet you.

Great to meet you Max!

thanks for introducing us to Max! He is quite a handsome mancat! Love his jacket...he definitely is "blog worthy!!"

Max is such a cutie!

Nice to meet you Max!

Max is a seriously distinguished mancat! Thanks for the introduction!

Nice to meet Max, love his hunting jacket. How distinguished.