This week we've decided to go way back and post some of Mommy's favorite old pictures of Delilah and I. Next week we'll flashback with Bella and Sweet Pea

We think Mommy is just trying to find an excuse to post her favorite old pictures of us but we were adorable little kittens so we can't blame her for that.

Samson having a smoke - December 2006 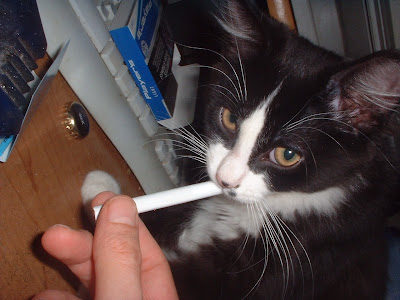 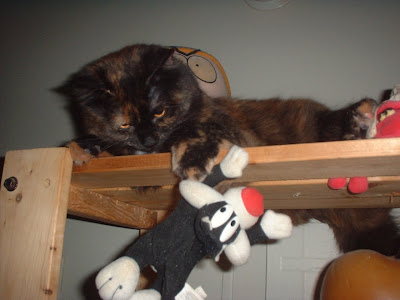 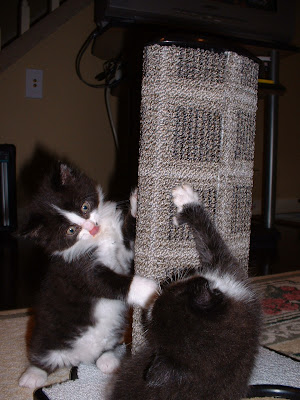 Delilah, hardly taking up any space at all on the computer desk - October 2006 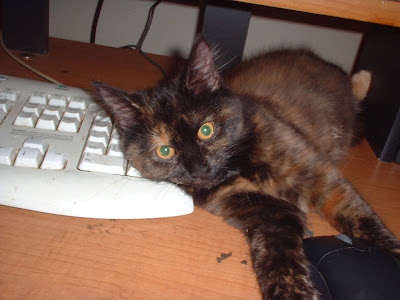 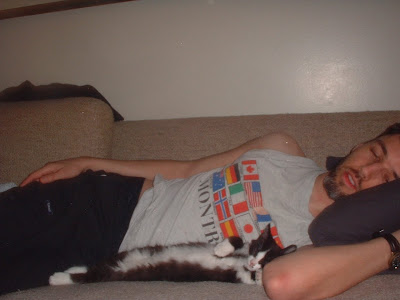 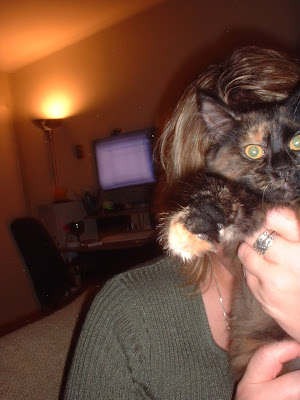 We hope you enjoyed those as much as Mommy did!

P.S. Mommy still hasn't been able to catch Louis (the stray) but she's doing her best and leaving lots of food for him. She hasn't seen him since Tuesday, but the food is disappearing.
Posted by The Monkeys at 12:01 AM

Love the pictures. I especially love the one where Samson is imitating the Ball Guy!

That imitation of The Ball Guy sleeping is really cute! Love all the pictures!

Oh gosh those pictures are so much fun. Samson, we cannot believe how cute you were. Delilah you were darn cute yourself. We love those pictures.
We are cheering Mom on as far as Louis goes. He will come back.

You know our mom is squeeing over those adorable baby pics of you both!

Good luck to your mom re: Louis! We hope she can get him.

Cute!! We love the one of Samson sleeping with the Ball Guy!!

Adorable!!! So many cute photos and cute baby kitties!

We loved all of your pictures and mum was showing herself up as usual giving kisses on the screen!!
Luv Hannah and Lucy xx xx

Those were wonderful pics!!! Come on Louis, good stuff is waiting!

Oh wow!!! Adorable Samson and amazing Delilah!!! Look at you two as itty bitty kitties!!! How lovely and mega squeeeeeeeeee!!!!!

Awwww - these are such great pics - thanks for sharing!!!

Hugs too to lovely bella Bella and Sweet Pea!!!

And yay for looking out for Louis! Take care
x

The Florida Furkids and Angel Sniffie

We loved the flashbacks......mama really got a good laugh outta The Ball Guy and Samson sleeping!!!!!!!!

We continue to purray that your mommy will tame Louis.....it took our mama a little over 3 months to tame Shelly enough to bring her in the house to live with us boys.

Love to all of you....you are such dear friends.

Great pictures of yous guys when yous was young and cute! Wait, that came out wrong! Yous still cute! I mean handsome and beautiful!!
Me thinks me should stop now.....

Those are ADORABLE! Samson, we're glad you kicked the habit. Now we can't wait for next week...

I just came back to let you know I received bad news at the vet today.

I love those and yes your mum is right they are adorable.. Hugs GJ xx

We love your baby pictures! You and Deli are absolutely adorable! We think your mom can post these any time she wants to!

We're purring that she catches Louis soon too!

Oh my! We just can't believe you were once so tiny -- both of you! You were adorable then, and you're adorable now -- just bigger.

What a treat to see your tiny feet!

We loved the pictures and hope to see more and more of them. I love seeing baby pics.

I was wondering about the stray and I hope that is him eating the food.
xoxoxox

We love these flashback pictures! The one of Samson with the Ball Guy is especially adorable! :)

You were both so adorable, and still are. Our favourite is Samson with the Ball Guy too.

Mom is squeeeing like crazy over the flashback kitten pictures! Samson imitating the Ball Guy is just too sweet for words!

Such cute pictures! We hope Louis has the good sense to accept your assistance!

The flashback pictures are gorgeous - thanks for sharing....

Aww, cute to see the baby pictures! I love the pix of Samson imitating the ball guy!

So your Mommy is tall too! Does she have trouble finding clothes that are long enough! I have trouble with dresses and shoes. (and sometimes pants but am so glad J. Crew and The Gap have Tall sizes!)

We should definitely hang out. Especially since she likes cupcakes. (and so does Catsparella!)