Bella has lived with us since June and she and I are no closer to being friends than we were the first day she arrived.

The problem is, she thinks she's the boss when I clearly am. Neither of us will back down. 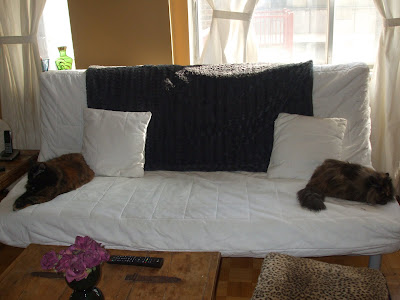 That doesn't stop peaceful Samson from trying to get Bella and I to be friendly. He's always coming between us trying to show us both how much he cares about us. 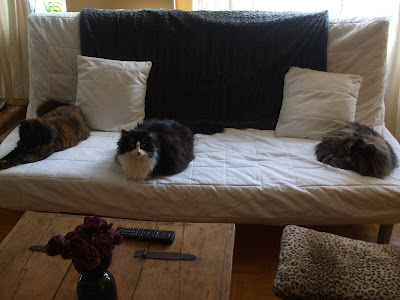 What Samson doesn't realize is that he's one of the reasons we're fighting! I see the way she looks at him, and if she thinks I'm sharing with her, she's dead wrong! 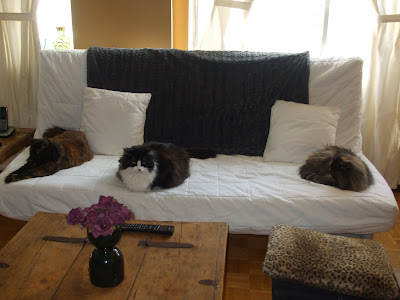 I'm beginning to think that Samson just loves having two girls fight over him!

You mean two's a company, 3's a crowd?
Samson's lucky guy with girls on both sides. :)

You're probably right about Samson! He's got it good.

Handsome Samson - you are one lucky mankitty!!!

Oh Samson, what a tough life you have with those two ladies wanting all your attention. Too funny. But you are one handsome guy and we can't blame them one bit. Hope all of you have a fun day.

Our mom sends her sympathies, having had beloved angel Annie and Nicki at it for almost 4 years, daily. It can be stressful.

However, we think Samson's a typical mancat and probably gets a charge over having two gorgeous ladycats vie for his attention! :-D

Here's another Tortie that thinks he is...the cat's meow! ♥♥

Oh my Samson, that's a good problem you have there!

We think Samson is enjoying all the attention he gets from you both - is he looking smug??
Luv Hannah and Lucy xx xx

Dear Delila
Me don't like the new cat in our house either (well he is starting to grow on me). Don't worry. Be happy

Samson, seems like the gerls are fighting over yoo! Lucky boy!

You girls are both gorgeous....maybe Samson needs to be cloned so there is one for each of you???????

Deli, always remember Sammy is waiting in the wings if you ever decide to give up on Samson!!!!

Love to all of you.

Delilah, of COURSE Samson likes having two girls fight over him! And of course there are issues - to strong willed Tortie girls in one house? We know some day things will calm down - it just takes a long time sometimes!

Not to worry. My Meredith Ann has been with me for over a year. She does not get along with any of my boys and still hisses at Jasmine. She's happy though .. so I won't worry about it anymore.

Deli, maybe you and Bella will just have to agree to disagree.

If only we could clone Samson so all of us girls could have him too! Deli, you are very lucky!

I hope you can become friends but Samson is one lucky guy.. Hugs GJ xx

Many mancats would envy Samson in his position between two lovely torties.

It's too bad Deli and Bella can't be friends, but mutual tolerance is the next best thing.

Maybe they can just agree to share the top spot in the hierarchy.

Samson
We think you are stuck between two gorgeous girls!

Delilah, I don't think Samson is aware that Bella likes him as much as you. Maybe you should tell him and then he won't want to be furends with Bella?

DUDE! If I were there, I'd hafta give you a "High 5"! Yea, Samson knows exactly what he's doin' sittin' close to the ladies!

Samson...you are one lucky mancat!!

Samson, you are such a flirt! Girls, I'm sure you can someday get along...we're purring for that to happen.

Every mancat secretly dreams of having two girlcats fighting over him.