Spay Day USA (and Canada too) 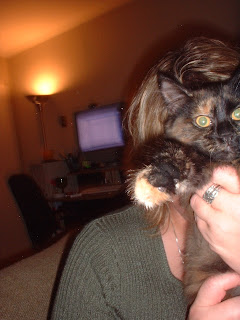 Mommy had written a long, angry rant about people who do not spay or neuter their pets but scrapped most of it because she realized she was preaching to the choir. She said that it is much better to think about the wonderful people who take care of their responsibilities as compassionate human beings and do what they can to bring the over-population of pets down. Even though it's better to think about all the goodness that is out there, it's also important to recognize why the problem is there. Here's a part of the story we wanted to share. This is Karen, aka my Mommy:

"I was playing a game in a favorite chat/game website of mine and asked an online acquaintance how her new kitten 'Snowpants' was. She replied that he was now living outside because he had 'sprayed' her home office. She added that he was lucky he was not dead. I was so shocked and horrified because from previous conversations with this woman, I thought she had a love for animals (she also has two dogs). I tried to remain calm and asked her if Snowpants was fixed. She replied that no, he had not been fixed but still came around for food. I told her that Snowpants could potentially father thousands and thousands of unwanted kittens and that if she didn't want to spend the money to get him neutered, that she should bring him to a no-kill shelter where he cannot reproduce and hopefully be adopted out. I found her a low-cost spay/neuter location in her area of Texas that she could 'afford' to bring Snowpants. She had never expressed a lack of money in the past, but somehow now it seemed she did not have the money. I blurted out 'Then you shouldn't have ever got him'. Surely she could make that 'sacrifice' and have this poor kitten fixed. I tried to convince her to bring him in to be neutered and then bring him to the shelter. Or worst case scenario, just bring him to the shelter and not leave him outside! I tried to make her understand that Snowpants alone would contribute to the suffering of so many kittens and cats waiting for homes. She said she felt bad about it but I'm not sure if she is going to do anything about it (although she said she would). I can only hope that I convinced her to do something about this situation.
I'm keeping my fingers crossed that Snowpants is not left to procreate at will and I will try to keep my distaste for this woman inside until I convince her to take care of her responsibilities."

I can see why she's mad. That woman sounds so selfish. I hope Snowpants is alright and gets placed in a home with someone who loves him enough to ensure he's not able to make more kittens that don't have a home. I also hope my Mommy can convince this woman to bring Snowpants in to be fixed. I told Mommy to breathe and concentrate on the task at hand. She's like a bull in a china shop but we love her anyway ;)

Delilah
xoxo
Posted by The Monkeys at 11:09 AM

I've been trying to leave a comment all day and the blogger word verification has been broken (it's a "known issue" according to Blogger help - but still frustrating!) Anyway, I wanted to say thanks for trying to help Snowpants - I also hope he finds a good home. People like the woman who wouldn't get him neutered make me sad :(

Daisy filled me in on the problem with embedded comments. I'm sorry for the frustration. I tried to post on Noir's post yesterday and couldn't! I changed it to the pop-up option now :)

The Snowpants saga is still ongoing, unfortunately. It makes me sad too, Mish.

Thanks about the photo. Deli seems to like to be the star and she always gets her way ;)

Lucky me my mak spayed and neutered me and my brother!
it is a good thing, right?

i was tutored when i waz a tiny babycat. Iz not need no pompoms, dey just make me heavier! Also my sisfur Lussie was spayed but how come she sounds like an intact tomcat when she talks and i has dis tiny thin voice? I dun get it, i'z the mancat of da house!

This story makes me sad because this is the story of my new brother Nigel (not that we know the story). He did have a home in the neighborhood at one time because he did come in our yard a couple of years ago with a collar and a bell...then his people moved on. He was left unneutered and alone, and kitties don't do so well on their own. Luckily he's adjusting now, but it will take him time to regain his trust of humans and he is now neutered as he should have been years ago (the vet thinks he's 3-4 years old). Keep working on that human to take care of her basic responsibilities!

Our mom says she agrees 100% with your mommy and wish everyone took care of their responsibilities and spayed and neutered their pets. We hope that lady wises up and listens to your wise mommy!

Thanks so much for the purrs of Cal, it really means a lot to us!
XOXO

We were trying and trying to comment yesterday too. It is hard to believe that the odd woman doesn't know, it might be that she just doesn't care. How sad for Snowpants. Life is rough out there for an unneutered male. By