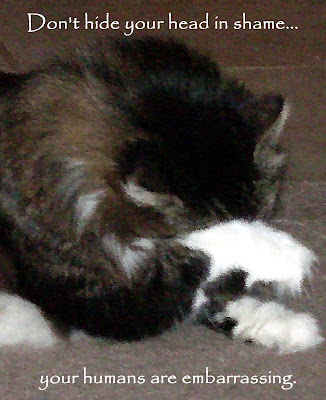 The lovely Fin challenged us (and everyone else) to a bit of a game. We're going to tell some of our humans embarrassing moments. Fin suggested that we not be ashamed. Hopefully this will be therapeutic and we can move on from here...

We're sure we had a video of The Ball Guy singing loudly to me (Delilah) when he thought the video camera was off but unfortunately, Mommy thinks this is on the old computer from which we still have not retrieved all of our pictures and videos. Hopefully we can find it for the future.

-When Samson was a kitten and he escaped on to the balcony, Mommy panicked and burst through the screen door! I'm not exaggerating when I say burst- she literally threw herself at the screen. The door fell along with her, nearly crushing the confused and terrified Samson. The Ball Guy couldn't look her in the eyes for weeks (He was embarrassed too!).

-When Samson had his recent bout with urinary tract problems, and the vet told her to leave him there for the day, Samson told me that Mommy started crying and grabbed him by the head, kissing him and calling him her 'Special Little Monks'. Poor Samson was so embarrassed that he didn't mind being left there after that. I don't know if I can ever face Dr. Gilmore again.

-One of her nicknames for me is 'Beans'. It evolved from Deli, Jelly Deli, Jelly Beans, Deli Beans and then finally, Beans. Sometimes when I'm sleeping, she just yells out, 'BEANS!', to try to get my attention. I always ignore her but ignoring her sometimes makes her more persistent. It's awful!

-One time recently, she came home from work with a lot of bags and she had trouble with the lock. By the time she got in, we were both in front of the door waiting for our greeting scratches. She urgently tried to get past us without giving us scratches and ran for the human litter bowl. She didn't make it on time and she started yelling all sorts of bad words!!! She gets mad when I shoot litter outside of our box but she can't even make it to her own litter bowl. At least I do my business inside my box. She spent the next hour cleaning up and grooming herself and washing her clothes and completely ignoring us! Unacceptable and totally humiliating! At her age, she's not even litter-trained.

-The Ball Guy has the most bizarre list of names for us and when we play ball, he runs after me rolling his 'R's and stamping his floppy slippers on the floor and calling me silly names. A sample of the latest names are Schhhmalls, Rrrrrrrrotten pooh pooh, Puppy, Schmoonimum, Purrrre Evil, Schmellins, Schnitzel, Rrrrrubbins, etc. I don't think he's called me by my name in years! He calls Sammy, Schmall Guy, Dude, Fuzz, Flash, Black and White and Lazy. He calls Mommy some weird names too but I'm not allowed to type them. Humans!

I'm not sure how therapeutic this was because I'm still mortified! I do love both of them very much, though. I guess as long as they keep feeding me, I'll put up with the silliness.

Thank you, Fin! We feel your pain.

I laughed so much at this. I think we can all relate in some part with the things our beans do. I think having a pet gives them some sort of outing for these things.

OMC! That was hilarious!! Yep, we can definitely relate to a lot of your post. Humans are so embarrassing!!

Ha ha ha! Alice and I LOVED this post! But unfortunately, Momma read it too and she told us not to get any funny ideas.

Soooooooooo funny! My, you don't spare the details do you? If your book is like this, I'm lining up at the bookstore to buy it, fur sure!

It's like you can put yourself in Delilah and Samson's heads! We hoomans are pretty ridiculous at times.

This post was highly snarfable, as in, I snarfed my morning brew while reading it. It should have come with a disclaimer!

Hopefully it was cathartic for you both and you will not be needing years of kitty therapy!!

Your beans are just as crazy as the two we live with! Our Mama is laughing in pain over the mental picture of your Mom bursting through the door! Our Mama's throat is sore because of the scope, but that's okay. The laugh is worth it! Hahahahahaha! Ouch! Hahahahaha!

This was a very funny post. Humans embarrass us, but what would we do with them.

We're laughing so hard at the mental images these bring up! We wish you had a photo of the screen door incident. But we do think your mom is really nice to let you post all these things, Delilah!

P.S. Do you get called "Tort" and "Torti"? Tasha does, and she doesn't like the humans to use that word when talking about any other cat (for example, while looking at photos of you and Isabella!)

hahaha! You have enough material for an expose book!

Great post,
Its nice to reed it :)
You are looking
very soft on that shot ^__^

Oh how can you even live with them??? Hahahaha!

Delilah, that's very funny tattling! We're all laughing with you - not at you!

You might need an extra award my friends. Mom is laughing... Sigh.