Today's Tortie Tuesday lesson is indifference. Indifference is extremely handy when you've done something that humans consider 'wrong'. Actually it's a cat way of gaining power. The key is to believe you've done nothing wrong and act like they're the ones who are misunderstanding the situation. As cats, we know full well that we're the boss but with indifference used properly, the humans will believe it too.

Mommy's computer has the on/off button on the top of the computer tower. It's great for Samson and I because when she's spending too much time on the computer, we just turn it off to subtly let her know that she's been on long enough and now it's time to feed us or pay attention to us. This photograph was taken just after I turned it off and she yelled 'Deli!'. The key is to look away from the accusing human and to not acknowledge his or her disapproving stare. If I had lips, I would have been casually whistling. There's no way she can prove it was me and she knows it! 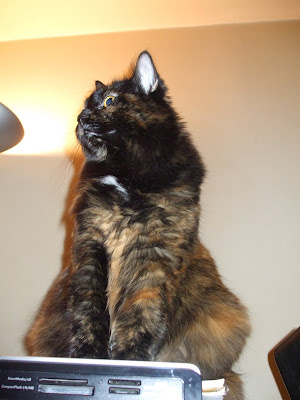 Another important point to remember is to not be afraid to be near the scene of the alleged crime. Here I am casually hanging out near a clawed sofa. The indifferent look on my face and the proximity to the sofa makes Mommy think that Sammy might be the perpetrator. 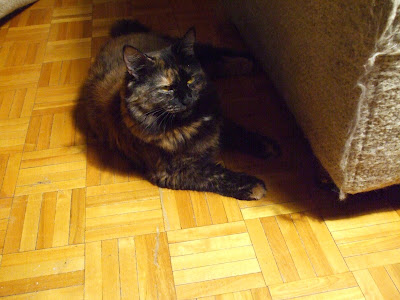 It may look like I'm a professional at the indifferent look but the reality is, I'm lucky enough to have Samson around, who is the master of the 'guilty' look. You can't help but look innocent next to a face like his. 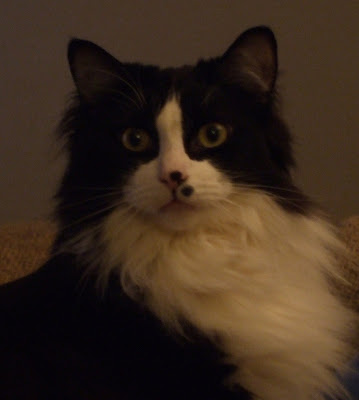 MOL hehehe dat is da way to do alright looks away cause you didn't do nofing wrongs at all!

Thanks for the tips, Delilah. I think i'll need to work on my indifferent look as I got in to big trouble today and got a smack bottom. I should have blamed it on Cosmo!

You have really mastered the indifferent look, Delilah. I think it's cool that you have learned to turn the computer off to let your Mom know that it's time to pay more attention to you.

Indifference is a very important cat trait! Thank you for telling us more about it!

I wish sometimes I could turn off my mom's computer!

What a great lesson Delilah! And you sure are the master (mistress?) of indifference. I'm going to have Alice study this as her lesson for the week.

LOL! This is great, Delilah! We learned a lot about looking indifferent in incriminating situations. We are gonna go practice now!

Deli, your face is perfect for this! We're impressed. (We think the on-off button on top of the tower is a great idea too - wish we had one!)

That look could get you anything in mums eyes...

This is an excellent lesson Delilah! We agree - Samson does have a guilty look


Sniffie and the Florida Furkids

Haha! Deli, you got that indifferent look down! No way anyone is going to blame you for something!

You seem to be the smartest kiniver we've ever come to know! WTG!!! And ya know what??? Samson has the guiltest face we've ever seen! Shhhhh, don't tell him we said that...MOL

That was a very timely lesson. I have been honing my "aloofness" skills.

Thanks for the lesson Delilah. I think that Nanny is spending to much time in front of the computer.

Have a great day!

I always wondered what that look was...now I know!

Funny! Mom's big laptop has the on/off switch on top too. We have learned how to walk across it and turn it off. WE have not learned how to do it so she does not know who did it. Now she has a small pewter elephant sitting in shipping foam over the button. as if that will stop us!

Deli, you have it down to a science! Samson, on the other paw, seems to always look guilty even if he hasn't done anything. It must be that you keep him in a constant state of fear -- way to go!

How lucky for you, Delilah! You have your very own resident Scape Goat. Er... cat.

You are the picture of innocence, Deli, and no one will ever believe you did it...whatever "it" may happen to be at any given time.

You are also very wise, Delilah, and we look forward to more lessons from you in the future......

Love and purrs from us

Deli, you are truly the master of indifference! You're so beautiful and Samson is so handsome, we think both of you could get away with anything the humans consider "wrong".

Oh Delilah, you do a wonderful job at looking indifferent! And your point about staying in the area is very true - I always suspect the missing cats when something happens! Oh, and tell Samson that I saw a picture of a kitty that looked so much like him on TV last night - I totally thought it was him for a minute!

Delilah has the LOOK down! So pretty!!!! Have a great day!

I love it Delilah,
I learned alot from you ;)
hugs purss
Kareltje =^.^=

We used to turn off the UPS. Now Jan keeps a small stool over it so we can't reach it. Usually. Cameron's foot slipped recently and all went dead. hehe

You do the indifferent look so well.
Mum's new computer has got the on off switch on the top too and it is a soft touch so we can turn it off very easily.

It's obvious that we can learn a lot from you, Deli. Keep those lessons coming!

Deli, those are some great lessons. We have much to learn from you! It definitely helps having other cats in the household, though, 'cuz blame can be assigned to any of 'em...usually it ends up being the "Not Me" ghost who does everything around here! MOL