It is getting warm enough for the balcony window to be open again so Samson and I have been at our posts soaking up the smells and sounds of a thawing city. We don't have a great view here but we can smell and hear everything! Mommy laughs at us because she thinks our noses look like bunny noses while we try to inhale as much of the smells as we can. 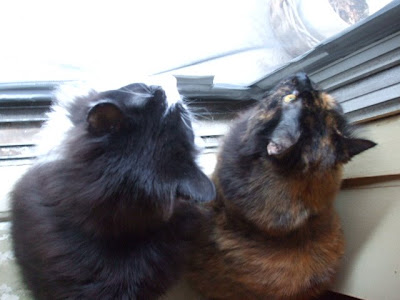 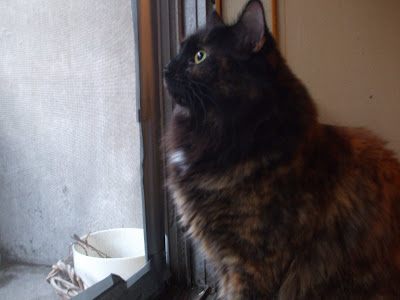 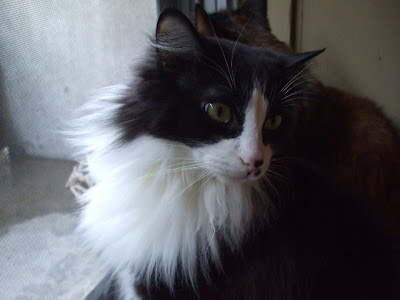 The screen is a little beat up because Samson still tries to climb it and he's busted through it a few times. Mommy doesn't want him on the balcony (or me, for that matter) because there's an adjoining balcony with a sheet of metal that separates it and there's space for a cat to get under to the neighbors. The neighbor doesn't like cats (what's wrong with her?) so Mommy doesn't want us over there. Plus, we're pretty high up and because we're still young, she doesn't know if we'll try to balance along the balcony edge. Her old cat, Muddy was allowed out there but she said he couldn't jump up to the top of the balcony if he tried!

Here's a video of Samson trying to burst through the screen again. There's a little bit of swearing near the end when the Ball Guy watches our reaction to a seagull squawking (Mommy has to learn more about editing video). If you're offended by that type of stuff, keep the volume down. Samson still thinks he's a kitten and that old screen will not hold out long against his big body!

Speaking of Samson thinking he is still a kitten, he is competing in the Kitty Fight Club competition and today is the last day to vote for his round. Personally, I'm a little offended that Mommy didn't enter me in the contest but I'll let it slide this time. 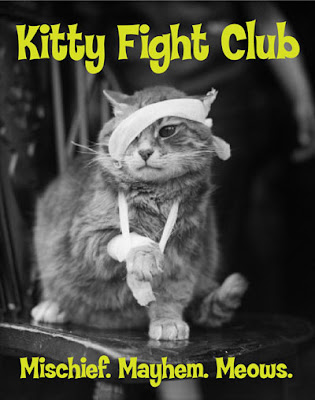 Delilah
xoxo
Posted by The Monkeys at 5:00 AM

I love the bit where Samson stops to give you a little wash.

We'll have Kitty Fight Club next year, so it can be your turn then, Delilah!

Spring smells are nice. What's wrong with the neighbor lady that she doesn't like cats? Wonder if there is something they can do to fix her brain and make it right.

Hi you guys! Spring DOES smell wonderful doesn't it? I'm lucky enough to live in the country so I gets to go Outside and help Momma garden on the weekends. I likes it too when she opens the windows for me to smell the birds. But Samson...bustin the screens is Not Cool dude.

We love the spring smells too! What is it with neighbors who don't like cats.....who couldn't love a cat?! We have neighbors like that too.

We are going to check out the fight club!

Great video! We liked it when Delilah got a kiss too.

Mom says she thinks that you two (or at least Samson) WILL try to balance on that railing, so it's a good thing your mommy doesn't let you out there.

And Tasha has torn up all the screens in our house - yours is actually in better shape than ours are. She doesn't even want to go out - she just likes trashing them.

It looks like Samson is really trying to let you both out! We love the smells of Spring, too!

Yeah, open windows are the best.

Spring certainly does smell good! Our windows are never opened that much because mommy is afraid the screen will fall out which means we will too.

Oh, that must be some sniffy smells! Samson. Those netted escape-prevention things are a nuisance aren't they?
Purrs, Siena

P.S.: We're not overwhelmed by the drinking fountain. We did a few slaps now and then but it's not like we are drinking like mad from it. Mom on the other paw needs to go to the toilet all the time now. Hahahahaha!