On Saturday night, Mommy had some friends come over for dinner. They were drinking from those funny-shaped glasses and making a lot of noise.

Delilah loves company and flits around saying hello to everyone (especially the men), but I'm more of a one-on-one kinda guy and big crowds make me uncomfortable. I just stayed out of the way and let people come to me. 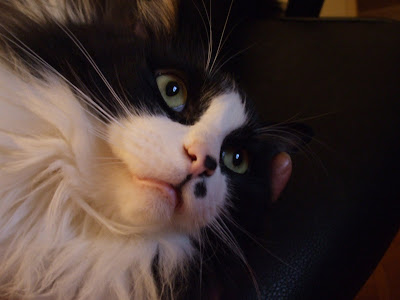 One of the guests was Remo, the guy who adopted my brother Ammon. Ammon and I used to be be pretty close when we were kittens (he's the little black one snuggled up with me), but we haven't seen each other since the day we were adopted. 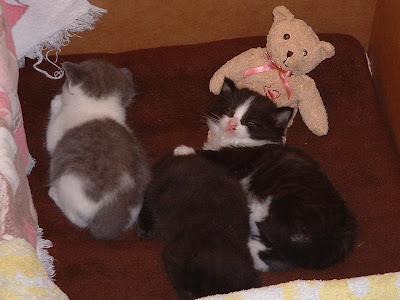 I had some one-on-one time with Remo and I can see that my brother is a lucky cat! Remo is a very nice guy and I had a purr session with him (although, I don't think he purred much).

Mommy, of course, was asking Remo all about Ammon. He is doing very well except he also had a problem with cystitis like I did. She wonders if maybe it is genetic or had something to do with the fact that we weren't fed by our cat mom.

It turns out that Ammon has his picture on the internet doing a funny thing. It looks to me like he was just having fun, but all the humans laughed when they saw it. They laugh at the silliest things! 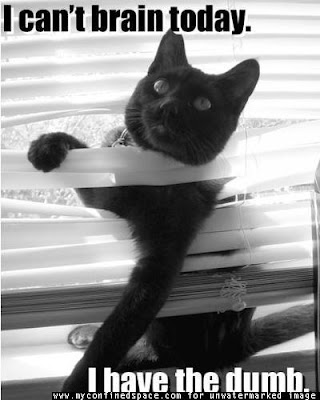 Maybe cystitis runs in the family, but, after seeing my brother Ammon, I think it's more likely that handsome mancats run in the family!

P.S. To answer Martin's comment, my little sister is the pretty grey and white kitty in the kitten picture.
Posted by The Monkeys at 12:01 AM

Samson you have a handsome brother!

Maybe your right - Being a handsome mancat runs in the family...

Did you have any sisters?

Samson such a handsome brother!

Hey! Sandusky here had cystitis! The vet put him on a special diet.... no fish forever!

You do have a hansome brother and we think his picture is very funny!

It looks to me like Ammon was having a bit of fun with the blind. He is very handsome.

I wish i had such a adorable brother :)
He looks fantastic !!

Samson, your family had furry good genes! Ammon is as handsome as you are!
That picture is sooo funny!

Handsomeness DOES run in your family! And Tommy melted when she saw your baby picture!

Awwww, your baby picture is so cute! Your mom needs to tell Remo that Ammon should be blogging. Then you two could keep up with each other! That's a fun picture of him with the blinds, he must have enjoyed those. MOL

We'd be more like you with the guests, except we wouldn't even stay out to be petted -- we'd be hiding under the bed and couch! We don't like people except for Mommy.

Looks like cute runs in your family, Samson, 'cuz Ammon is as cute as you! And almost as funny!!

Have a fantastic mancat day.

Ammon is very handsome! Mom says that Gandalf has a little bit of the dumb when it comes to closed blinds, too!

It was nice meeting your brother! Handsome does run in your picture. Very sweet baby pictures!

Your brother is very funny...good thing a human was there to un-funny him! Awwww, kitten pics..Mom loves kitten pics. ..........Thanks for stopping by with purrs for us and sweet OBI, we appreciated your support. =^Y^=the Cat Street Boyz

Samson
YOO are both furry handsome mancats...and we LOL'ed dat pixchur of Ammon!

It's so nice to see picture of you and your brother when you were little. You're so handsome and you're brother too!

I agree! Handsome Mancats run in the family. It's always good to catch up with family.

Wow, you come from a gorgeous family!!! And your brudder id really kyute but you are a true Beaut!

Samson you are so cute and so is your brother - it totally runs in your family! I hope that Ammon does ok with his Cystitis - we know you are doing ok and we hope that being ok runs in the family too!

Oh Samson, you were the best looking kitten in the bunch!

Handsome ManCats really do run in your family.

Your brother is very handsome...good looks definitely run in your family!

Mom laughed at the picture too!

That is a nice looking family. I too like to have guests come to me Samson, make em work for it I say.

Samson, you were such an adorable kitten and both you and your brother are very handsome Mancats! We think his picture is furry funny!

Wow, Handsome and smart describe
both Samson and Ammon, those are
great kitty genes! :)