We are featuring a friend of ours today on our blog and he's a dog!!

When Mommy was a little girl, she lived in a place near Toronto. There was another little girl next door named Donna who Mommy really had fun playing with. Unfortunately when Mommy's parents got divorced, she was forced to move away and she never saw Donna again...until Donna found her on Facebook! All that to say, after many long email conversations, she found out that Donna has an adorable little doggie named Charlie! 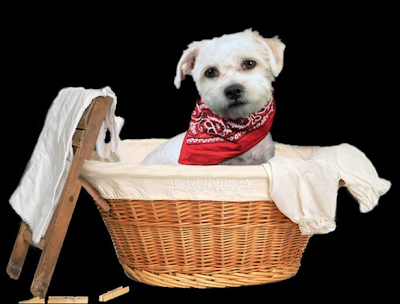 Charlie was born Feb 29 2010 and he’s a Lachon, a cross between a Lhassa Apso and Bichon Friese. He lives with Donna, Kevin and Donna's daughter Sidney in Ontario and it seems to us he has the perfect doggie life filled with lots of love and plenty of treats.


Our favorite story about Charlie is that Donna brings him along to Kevin's hockey games. He's pretty well-behaved, but can get really exited as the puck slides right by. His little heart pounds so fast and he becomes one of the loudest cheerleaders and barks his head off! Donna has to turn him around to face the other way to calm him down.

Here is Mommy's favorite picture of the adorable little Charlie enjoying a breeze. She thinks it's really funny! 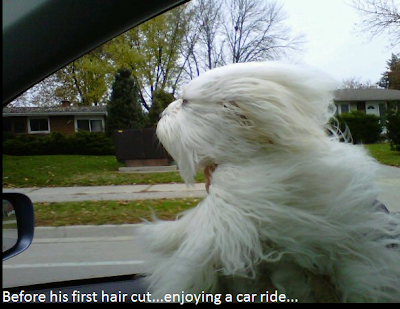 Charlie doesn't have a blog but we hope that he gets one in the future.

I think Charlie is cute and I don't think I'd be afraid of him (I'm pretty sure I'm bigger than him), but Mommy better not get any ideas about getting a dog!

Charlie is really cute! Mommy says FB is incredible and she's thrilled your Mom found her good friend! That is amazing.

Charlie is a darling. I am so glad that your Mom and her good friend got together again on Facebook.

Aww, Charlie is very sweet! Social media does bring our worlds closer together!

Ahhh...I LOVE the doggy in the car window shot--too cool for words! Tommy thinks Charlie is a cutie too--and Facebook...Tommy LIVES on that Wall-it's great it brought too old friends together. Technology is something else!

Charlie is really cute! How nice that your mom found her friend again!

Cute woofie, but it's always scary when the mom posts something about a woofie on a cat blog, isn't it?

We're glad your mom found her friend again - and that is a very handsome dog. Of course just because he is handsome doesn't mean he can take over your post Delilah. We'll get the placards out and start picketing your mom!
luv Hannah and Lucy xx xx

What a cute pup ~ love the last photo ~ classic!

How nice that yoor mommy and her friend were reunited. Our mommy found 2 olf friends she'd lost touch with on Friends Reunited! Isn't the internet a marvelous thing?

The puppy is gorjuss.

I have to agree about FB. I have found people that I taught horse back riding when they were like six years old back in the sixties. It is so much fun.
That Charlie is soooo cute. Delilah, I bet you would get along fine with Charlie. We love our dogs here. He looks like a really fun dog.

That Charlie is one cute woofie fur sure!

YAY for mum finding Donna and her most wonderful and adorable woofie, Charlie!! Awwwwww what a sweetie!!!

Charlie is really beautiful.. fur a GUY.. I guess i should have said HANDSOME. HEHEHE

How wonderful that your mom and Donna have reconnected again!!!! Childhood friends are soooooo special.

We send our love to all of you.

It is nice to reconnect with old friends! That Charlie pup is very cute

Charlie is adorable, and I love finding "old" friends on Facebook!

Charlie is so cute! We hope you guys can inspire him to start a blog so we can learn more about him. Isn't Facebook great? Mama is always finding old friends on there!

Charlie is so cute, love that picture of him enjoying the ride. How lovely your mum found her friend again.Hugs GJ x

He is truly adorable. I love him.
xox

That's wonderful that your mom found her friend through Facebook! And Charlie is as cute as can be! We'd love to see him at a hockey game!

Charlie is sooooooooo cute! thank you for introducing him to us!

I love the photo with him and his furs blowing in the wind!

Charlie is a doll! We think it's cool that your mom was able to find her childhood pal.