The other day, I found this box with a whole bunch of bubble wrap in it (it looks suspiciously like the box Tristan and Crikey sent us for Paw it Forward), so I decided to investigate further. It turns out that there's a bunch of toys including two crinkle balls (one of my favorite toys) that I've never seen before! I don't know why Mommy was hiding these balls in there! Anyway, I took them out and in the process, found that the bubble wrap was very comfy. 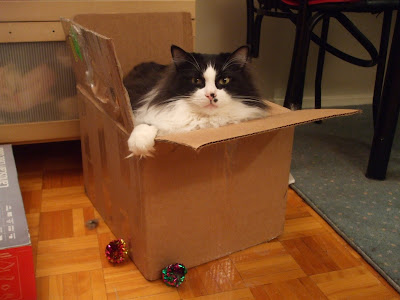 I decided to play with the crinkle balls later, after I snoozed. 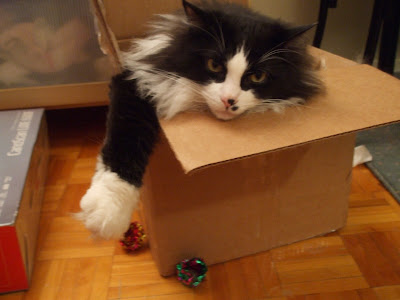 Mommy arrived on the scene and exclaimed, 'Samson, what are you doing in the Paw it Forward box for Angel, Isabella and Sadie?!'. Well I know she's not stupid, but sometimes I wonder. I'm a cat, and there's a box with cat toys in it; where else would I be? I was a little confused about the woofie toys, but I never know with Delilah, she has some strange tastes. Of course, I assumed this stuff was for Deli and I, sheesh!

I thought about it further, and remembered how pretty those girls of Beaded Tail are. If she is sending this stuff over to their house, I can hide in here until she sends it. I will pop out of the box and we will all play with the toys and eat the treats! Those girls are gonna love me! 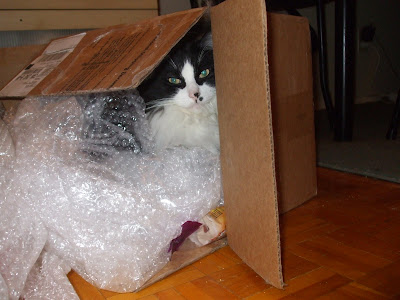 Have a great Monday!

P.S. If you girls don't see me in the box, I was discovered. I will leave as many furs as possible, though! And Mommy says she's still not finished gathering things for the box - she ordered something online so we have to wait for it to arrive.
Posted by The Monkeys at 12:01 AM

Email ThisBlogThis!Share to TwitterShare to FacebookShare to Pinterest
Labels: Paw It Forward, Samson, The Beaded Tail, Tristan and Crikey

Samson that is really a nice photo of you in the box! It is like you are saying this is my box!

You look all handsome and ManCat Marvelous! And of course--how would not think all that cool stuff isnt' for you??? :)

We know that Isabella, Angel, and Sadie would love to see you, Samson, but we think your mom might miss you! (Deli might even miss you a little bit too!)

P.S. We love those crinkle balls too - they're the best!

Samson...we think you would make the best Paw It Forward gift!!!

Those are good pictures of you! I'll bet that you left lots of good smells and furs in that box.

Bubble wrap is fun! Too bad you were discovered, Samson, but it's furry nice of you to leave some of your furs in the box for the girls!

Bubble wrap boxes are great for snoozing, our Mommy keeps one out for us just for that!

And of course a box with toys in it is meant for you kitties! Duh! How could your mom think otherwise?

That box is a purrfect fit for you. I think the momma bean wanted you to sit in it.

I have never tried bubble wrap, Samson! It sounds like it would be lots of fun!

You look very cute in that box!

Yesssssssssss
its your BOX :)
You are looking as a
real Mancat in that box :)
Sooooo cute !!

What a great idea to send yourself. Hope it isn't a long trip but just incase you should bring some treats along with the toy so you can have something to nibble on until the girls open the box. Good Luck Samson!

Samson, I don't blame you for thinking all that stuff in the box was for you. I've noticed you like to hang one arm out of the box while you're sitting in it! Very sauve look, dude!

Great idea, Samson! I tried to hide in that very same box! I even put the bitey on my Mom when she wouldn't let me have some of the toys that we sent to you and Deli. Heeheehee

Well, duh, of course if there's a box, you would assume it is for you. We doubt you'll get away with smuggling yourself out in the box to play with your friends, but we hope they enjoy the box as much as you did.

A box, your house, toys...um...why wouldn't you think it was yours?

Oh Samson do you think you could get diverted to my house?

OMC! I would gets into da box too! I do it all da times to momma and da boxes of new toys and supplies she gets for da store! I don't blames you at all.

Momma says dat she saws your momma looks at her status of order, we sents it da next day and its more den likely in customs now, we hopes you gets it soon!

Samson, we'd love for you to come with the box and we could all play together and eat treats! Our mommy would love to see you too but she said your mommy would be too sad so we understand if you can't make it. We're all excited to see what a mancat smells like though since we don't have any in our house!